There’s a Hint of Sweetness 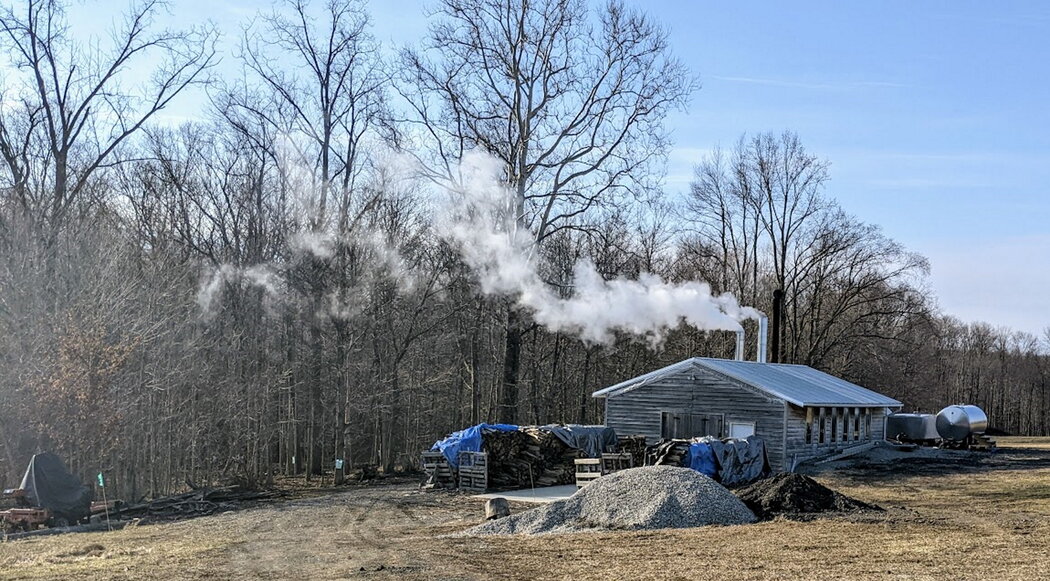 There’s a hint of sweetness and the smell of wood-smoke in the air as steam rolls out of the Brundage sugar cabin every year in late winter/early spring. 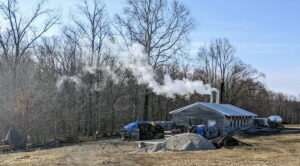 Owner Tom Brundage said maple syrup making has been a family affair for the Brundage’s since 1973.

The Riehm and Brundage families have been partners for more than 30 years, and Brundage maple syrup is available for people to choose for their Riehm csa market boxes. “I’ve known them a long time and they’re great people to work with,” Tom Brundage said.

Farmer Phil said the maple syrup provides an awesome option for people who build their market boxes to reflect their meal plan using local food — whether you’re planning to pour it on pancakes in the morning, stir it into your coffee for its antioxidant value, season some squash or drizzle it on ice cream.

At the Brundage sugar cabin, family members and several neighbors and friends take on the task each year of making the sweet goodness.

It takes a team of people

Most of our crew collects sap from trees, and other workers are inside minding the evaporator, cleaning and sterilizing tools and equipment with vinegar made by CSA market box member Glenn Ardner (pictured left), and bottling and labeling the finished product. “We all have our little niche,” Tom said.

The Brundages have about 2,000 trees tapped each year, and another 200 “in tubing”, which means a system of tubes is attached that allows the sap to run by gravity to a single collection point. 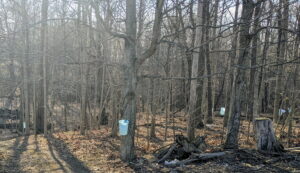 Buckets hang under the taps put into the trees

There’s a lot of physical labor involved in collecting sap from 2,000 trees. Each tree is tapped individually, a bucket is hung to collect sap. Workers then use ATVs to empty the buckets on a regular basis.

The amount of sap collected per day ranges from 1,800 gallons on a “slow day” to 4,000 gallons on a good day. The average is about 3,500 in a day.  All that raw sap is dumped into large collection bins at the cabin, and then it moves to the evaporator inside.

New in 2022 at the Brundage sugar cabin is a reverse osmosis machine. 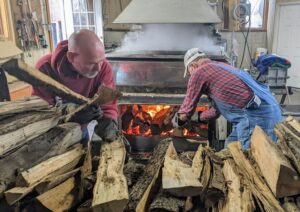 Every 30 minutes the fire is stoke with wood to keep the temperatures a maximum production.

It removes much of the water in the sap before the evaporation process begins. “We have drastically cut down our wood use,” said Barb Brundage Holman, Tom’s sister, who operates the evaporator.

Sap is fed into the evaporator machine from the holding tanks outside. “It’s always feeding in constantly,” Barb said. Then the finished product is taken from the machine and bottled for sale. The fresh bottles of syrup are then ready for your market box.

Barb said the Brundage family makes 350-400 gallons of maple syrup each year, depending on spring weather. 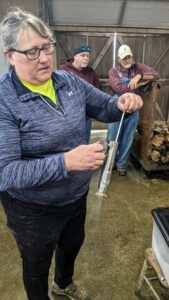 Barb testing before putting maple syrup into the jugs.

“It has to be warm during the day (above freezing) and below freezing at night,” she said. “In 2021 it was warm early and we worked 17 days straight, and then we were done.”

In 2022, she said production started on Feb. 23. Then the temperature got cold and it snowed, which stopped production until the cycle of daytime warmth and nighttime freezing returned. The optical temperatures for moving sap inside trees is 50 degrees during the day and 30 degrees at night.

Starts and stops are normal, she said. While other people are wanting the temperatures to get warm and stay warm, maple syrup makers are enjoying the ups and downs. As soon as trees bud, production is shut down. A chemical reaction within the tree gives the sap a bitter taste.

on pancakes, waffles and French toast, BUT Farmer Phil suggests some other uses. Consider pouring it over ice cream, and yogurt. It can be used instead of sugar in hot or cold coffee or tea. It can be drizzled on fruit, over ice cream or over cereal and stirred into hot cereals like oatmeal.

In cooking, maple syrup makes a great flavoring for cakes, pies or pastries. It can be stirred into baked beans or be used as a maple glaze for ham, chicken and pork. It can be used in placed of sugar in baking (with modifications for the liquid content) 1/2 cup maple syrup = 3/4 cup white sugar (+) plus reduce liquid in recipe by 1/4 cup.

In addition to all of those uses, the USDA Natural Resources Conservation Service notes that maple syrup is a healthy native food. 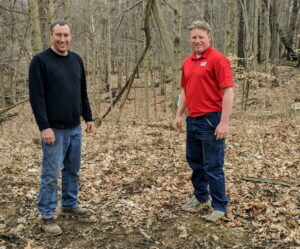 Cousin Courtney meets up with Phil in the woods for maple syrup making.

It’s 100% natural and organic, and contains 50 calories per tablespoon, which is about the same as a tablespoon of white sugar.

BUT UNLIKE SUGAR, that tablespoon of sweetness contains at least SEVEN beneficial antioxidants, SIX vitamins and amino acids as well as iron, calcium, zinc, magnesium, potassium, manganese, and phosphorus.

So all the labor involved is well worth the sweet, maple finished product.