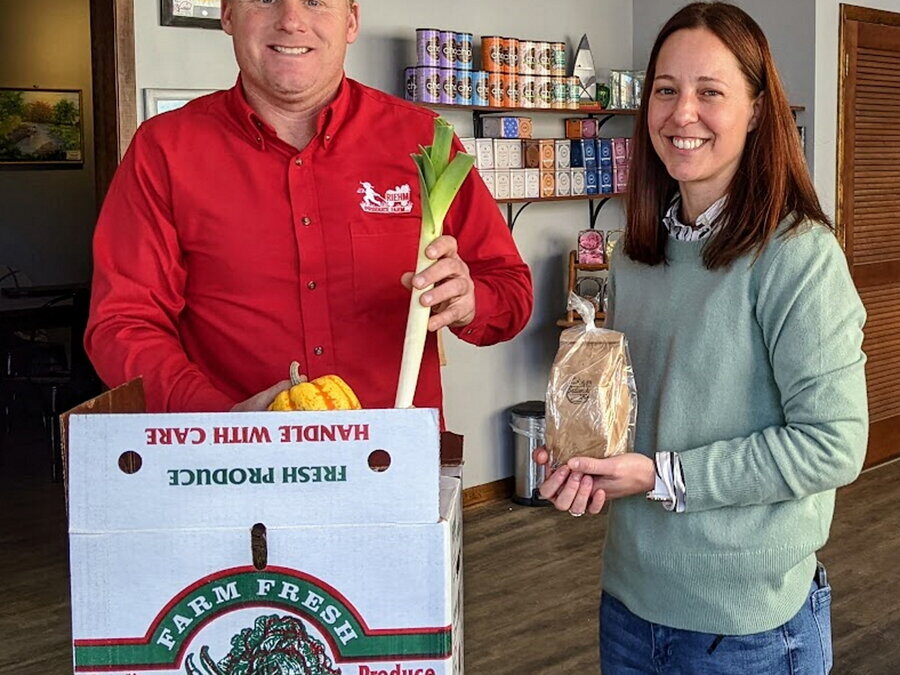 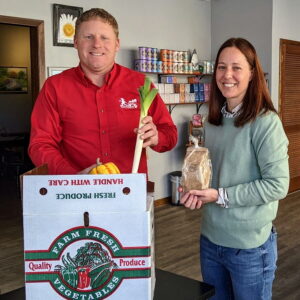 The eight-year partnership between Riehm Produce Farm and Bailiwicks Coffee Company has been mutually beneficial to both businesses and to CSA members who can choose to add Bailiwicks coffee to their market box.

When they connected in 2014, Phil Riehm said the family was selling produce from a roadside stand at the farm and Bailiwicks owner Jessica Wirth had been offering coffee in downtown Tiffin for two years.

As Jess said the 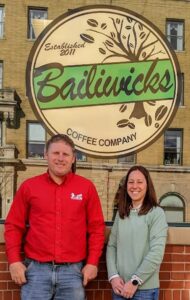 partnership with Riehm’s has extended the reach of Bailiwicks beyond Tiffin and into other areas of Northwest Ohio as Riehm’s broadened their service area.

“For me, my products are now in Bowling Green, Sylvania, Findlay.” Jess said, and everywhere else Riehm CSA Market Box members live. “For me, to do that on my own would be very difficult.”

The amount of coffee sold has tripled in those eight years, and Jess described the partnership as “definitely most successful.”

“There are people who know my coffee because of you,” she said to Phil during a recent meeting at the Bailiwicks coffee shop in downtown Tiffin.

“The two business owners philosophy’s go hand in hand,” she said. “We want the product to be fresh. The focus is on quality, freshness and being natural.”

Like most produce, Jess said coffee that’s been around for six months is no longer fresh.

Phil said the partnership started when they were directed to Jess to answer questions about taking credit card payments at their produce stand.

Not long after, the Riehm’s wanting to expand the farm’s offerings, and thought of Bailiwicks coffee. Phil said. “I knew her reputation. They have some of the best coffee. One thing led to the other.”

Jess said she and her mom used to stop at Riehm’s roadside stand on State Route 53 on their way to visit Lake Erie, so she was familiar with the CSA Market Box service.

At about the same time, Jess was starting to roast coffee right in her downtown Tiffin store at the corner of Sandusky and Perry streets.

“My goal was to roast my own coffee, although in the beginning I knew nothing about roasting,” she said.

After she opened in 2014, Jess said the coffee shop was so successful, her 10-year goal of roasting her own coffee happened within two years.

“Everything is roasted in-house by me.”

Learning the ins and outs of coffee has been a learning process. Jess said she’s learned and fine-tuned her roasting style to bring out the best nuances of the beans she sources from many parts of the world.

“For the most part, they’re all single-origin coffees,” she said. “So if you’re getting a Colombian coffee, it all came from that region.”

Some coffees also are blends, and many of the beans she uses would be considered fair trade value.

“There are certain times of the year you can only get certain beans,” Jess said. Each area has its harvest times.

Similar to growing grapes for making wine, Jess said coffee beans have annual variations due to the region where they are grown.

“It’s my job to bring out the natural character of the beans,” she said.

When fresh coffee beans arrive at the store they are green, Jess said she roasts them in small batches.

“That’s how fresh everything is,” she said. “Everything is micro-roasted. Small batches allow for more control, so it always tastes the same.”

She has learned to manipulate the roasting process by controlling the time, temperature and air flow to bring out the best specific qualities in the beans.

“The bags are not equivalent,” she said. “Coffee is absolutely an agricultural product.

As a farm product, Jess said each year’s coffee bean crop is different, depending on variations in temperature, rainfall, soil quality and other natural aspects. 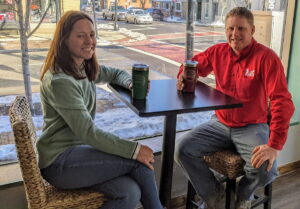 “It’s been fun to learn more about the science and agriculture behind it,” she said. “That been one of the amazing things. Each bean is so different. I have respect for the people who grow it, the people who process it.”

“The same spinach in early summer is different from the spinach in the winter,” he said. “Everything is the same, but temperature changes things.”

What doesn’t change is the variety of local food products members can choose for their weekly CSA boxes.

Phil said offering coffee expands the choices for members. In addition to locally grown vegetables, fruits and meats from the farm, members have a choice of adding coffee, bread, pasta, jams and jellies and other local products.

No matter which products members choose, Phil said it’s their goal is to provide the best local food products to members that are “healthy, natural, fresh and accessible.”