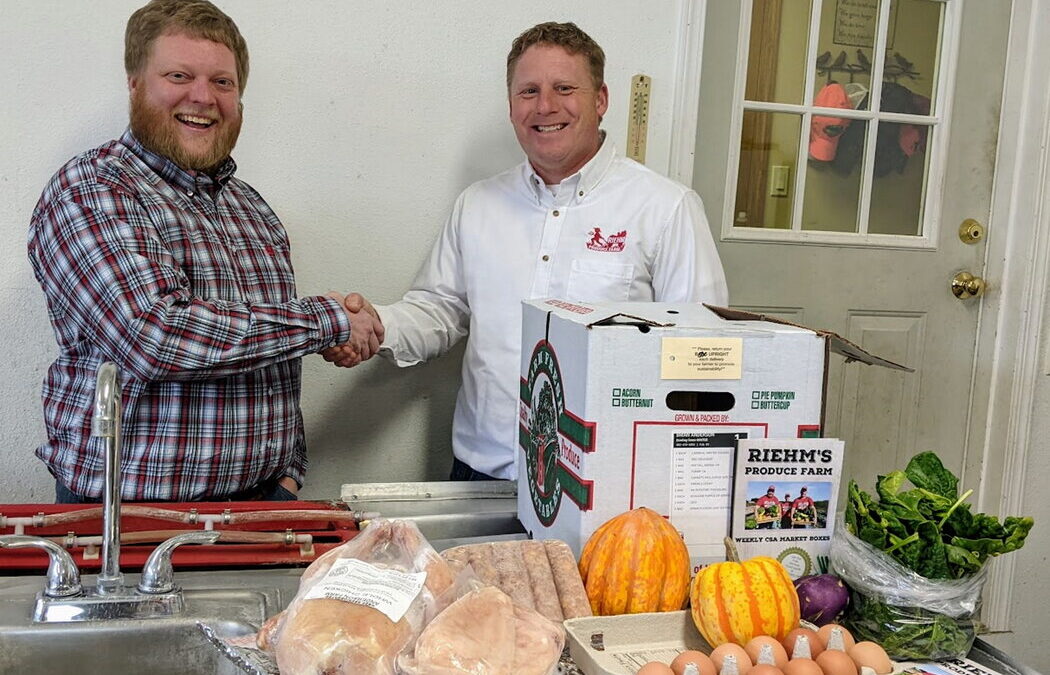 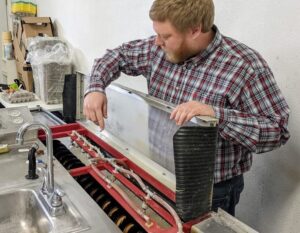 Brian, originally from Iowa, and Stacie from Bowling Green decided rural Bowling Green was the place to start raising meat chickens and layers. In 2014, they started going to the Bowling Green Farmers Market.

Brian and Stacie Anderson set up their farm products beside Riehm’s display at the market. The families started building a connection, and it wasn’t long before they started working together to create food samples together for people attending the market using products from each of their farms. They made wraps and other recipes with local ingredients and offered recipes to customers.

By 2018, Brian started working on the farm full time and expanded the farm’s product line. “He was really able to build our business scale when he came in full time,” Stacie said. Egg production became more efficient, and they began chicken meat production and specialty items as well.

Farmer Phil said CSA market box members had been asking for local eggs as a choice, so in 2019, Anderson eggs were added. 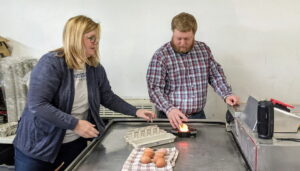 Brian said they decided to also raise chickens because there was a need for poultry. “In northwest Ohio, there are a lot of people who raise beef and pork, but there was about zero poultry,” he said. The eggs and meat are fully inspected by official USDA inspectors. “We could sell in any big box grocery store,” Brian said. “Food safety and having quality is really important to us. We stand behind our products.” To find a USDA-inspected custom butcher, Brian travels to Greeneville, Ohio — about 2 1/2 hours away. “We’re able to legally resell with that inspection component,” he said. “It’s an extra step of protection for the customer.” 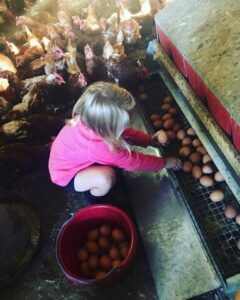 Going into their fourth season both farms are looking forward to continuing their collaboration. “We get really good feedback,” Farmer Phil said. “People enjoy the combination of products for their weekly boxes. Every year there’s been more and more demand for eggs.” Phil said he’s estimating that Riehm CSA customers will request 250 dozen eggs weekly during the summer season coming up. That’s an increase from 60 dozen during the first year.

In the winter season of 2020, Riehm’s added Anderson chicken as well. 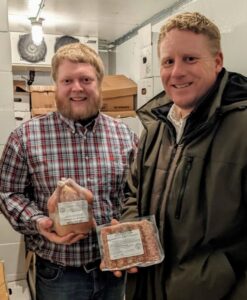 “First it was a trial run on the chicken and we expanded from there,” Farmer Phil said. The Anderson’s provide whole chickens and a variety of cuts. And starting in the 2022 season, Riehm’s is offering Anderson specialty chicken products such as flavored chicken bratwurst. They are uniquely made with a collagen casing, a natural protein product.

The Andersons said they started their farm after looking to the future. They wanted to provide a farm life to their children, ages 6, 4 and 2. The Anderson children collect eggs and take part in the process as much as they can. “Kind of like you guys carrying over your legacy to your family,” Stacie said to John and Diane Riehm. Phil Riehm started working on the farm as a child, and is continuing to work with his parents on farm operations as an adult, and continuing the tradition with his children. 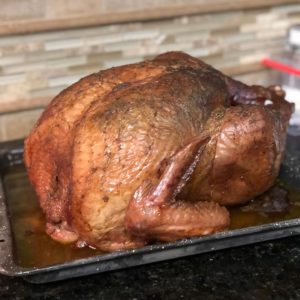 Thanksgiving turkeys can be added to csa members’ market boxes.

In addition to raising chickens, the Andersons grow corn, soybeans and wheat. And they raise turkeys for Thanksgiving. “We did turkeys on our farm for one year and the second year Riehm’s started adding turkey as a Thanksgiving option for their csa market box members,” Stacie said. The turkeys are freshly frozen. When people buy a name-brand turkey from a grocery store for their Thanksgiving dinner, Stacie said the turkey has been frozen for up to 10 months. “Whereas here, the fresh birds are frozen,” she said. Brian said Anderson chickens and turkeys are antibiotic and hormone free — which they have to be. “It’s illegal to treat poultry with antibiotics,” he said. “Our poultry, like everyone else’s, are not treated with any foreign substances.”

There’s never any water added to Anderson’s poultry, nor are there any preservatives. Brian said the chicken doesn’t dry out when it’s cooked properly. Of course, the specialty products such as flavored chicken bratwurst have flavorings added. “Once people try them and start cooking with them, they experience the freshness,” he said. “Even though they come frozen, the meat still was raised in the last few months on our farm.”

The Andersons noted that eggs are good to use for at least six to eight weeks after customers receive them. 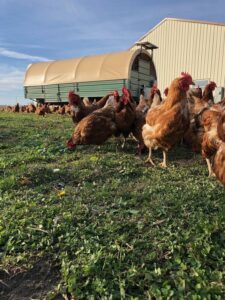 Actually, they’re good for “multiple months.” “We always give Riehm’s our freshest eggs,” Stacie said. “It takes only a few days to pack them.”

Comparatively, she said it takes a few weeks for eggs from large corporations to appear on grocery store shelves. Stacie said the Andersons produce 100% brown eggs for consistency and uniformity from the Golden Comet breed of chickens. “It’s helpful to have all the same grade of chicken that are all the same age,” she said. “We want that consistency so when you open that carton they look the same.

“Phil said he notices how much better the local eggs taste. “The people realize they’re fresh and the yolks stand up tall and taste great,” he said. Stacie said the rich golden yolks come from a better diet. Anderson chickens are fed a balanced diet, and they spend a lot of time outdoors, rotationally grazing year round. “They move all around our yard and have access to grass,” she said.

After a whole chicken is roasted, “we recommend to people you take the carcass and veggie clippings. Stick it all in a pot, cover everything with water and let it cook for two or three hours.” A slow cooker or instant pot also can be used. Vegetable clippings can be stored up in a freezer ahead of time. Include the stems from spinach, the outer layers of onions or any other vegetable parts that are usually cut off and thrown away. She said broth turns a dark, golden color similar to an egg yolk, and is full of nutrients. She said four or five cups of concentrated chicken broth can be made from one chicken, and then water can be added for use in recipes. “We freeze it in two- or three-cup bags,” she said. “That’s another $6 or $7 you’re getting back.”

Do-it-yourself chicken broth is a trend toward people becoming more aware of their food’s origins. “I feel like we’re experiencing a food shift,” Stacie said. “We’ve seen it coming for a while with people wanting to know their farmers.” She said she noticed the change four or five years ago, and it became more noticeable during the pandemic. “In the last year or two since COVID, people have been paying more attention to the quality of the food they buy,” she said. “I think that is an added benefit to what we do together with Riehm’s. “They aren’t shying away from making their own broth or making their own recipes,” she said. 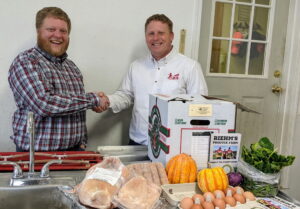 The collaboration brings local food to your neighborhood weekly

“I think people are realizing we can’t just rely on grocery stores,” he said. In addition to Anderson eggs and chicken products, Riehm’s csa market box customers have many local choices — Riehm’s veggies, plus fruit, bread, pasta, coffee, cheese, milk, ice cream, beef and pork. “We have all the things necessary to make a complete meal,” he said. CSA Market boxes are similar to meal kits that can be purchased through the mail such as Hello Fresh and Blue Apron. Except people meet us once a week in a neighborhood parking lot and we bring a customized box of food that is entirely local — all within an hour’s drive of Riehm Produce Farm. “It really is a complete meal kit for your family with the knowledge of who raised it for your family, and supporting locals” Phil said. “The fresher you get, the more nutrition and quality you get in your food,” Diane said.

“Building relationships happens at farmers markets sometimes and expands throughout a season,” Phil said. “As they become members they start to jump on the full experience.”